The WebSphere MQ FTE and Sterling B2B Integrator will communicate through a Hub and Spoke topology. So I will create a Hub and a Queue Manager on MQ. As well as one Agent. Later there will also be configured one Agent in SB2BI as well. Then these two Agents can communicate with each other. But there are some steps to be done to get there.

When I installed my MQ Server, I did not install the FTE part. The FTE part is included in the installation from MQ version 7.5 and later, but not installed by default. So I started by installing this feature (I ran setup.exe, and edited the existing installation).

Create Users and Groups on the MQ Server

WebSphere MQ FTE is based on having some users and user groups in Windows. This can be somewhat bypassed by editing the addSpoke script mentioned in next chapter, but to run the addSpoke script as is, the groups FTUSERS, FTAGENTS and mqm has to be created.

Since this is just a Test Solution, and I like to do it simple, I also added my user SI_User (the user I log in on my Windows MQ Server with) to all the User Groups. In that way I don’t need to log in and out as different users all the time. But the reasoning behind the User Groups and different Users is bypassed by doing that, so don’t do it in a Production environment.

My SB2BI Nodes is running on two Linux RedHat Servers, and I run them as root (not very good security-vise either, but this is a test/demo solution and as mentioned, I like it simple and hassle free). Thus I also need to add a user root to the MQ Server, since this is the user SB2BI is using when connecting to MQ FTE.

Below is the Groups for MQ created (FTAGENTS, FTUSERS and mqm)

To summarize the Groups and Users in each group:

NB: There is also one special thing to consider. If using a Standard Windows Server, the user Administrator is often used as default. But WebSphere MQ only has 12 characters for User Name. So the Administrator User is not recommended using since it is 13 characters long.

The next thing to do is to create a Hub and Spoke. There are two predefined scripts under <WMQ Installation Folder>\mqft\samples\scripts\ that need to be run.

I have an existing Queue Manager called SB2BIQM listening on Port 1414 (created in this Blog Post), and thus I will use port 1415 for this new Queue Manager to avoid conflicts. 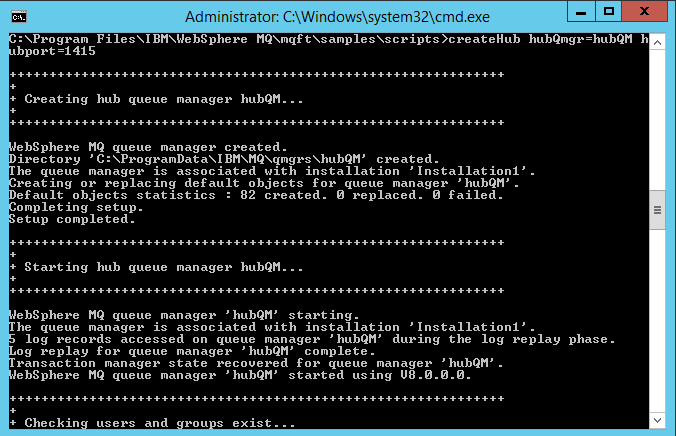 When the Hub is created, the Spoke can be created. The Spoke is the Agent sending and receiving files. I need to create an Agent that can be used to exchange files with the Agent that is created later in SB2BI.

If MQ is running at the same server as SB2BI, Bindings Mode can be used. If MQ and SB2BI are on different servers (like in my setup), Client Mode has to be used. 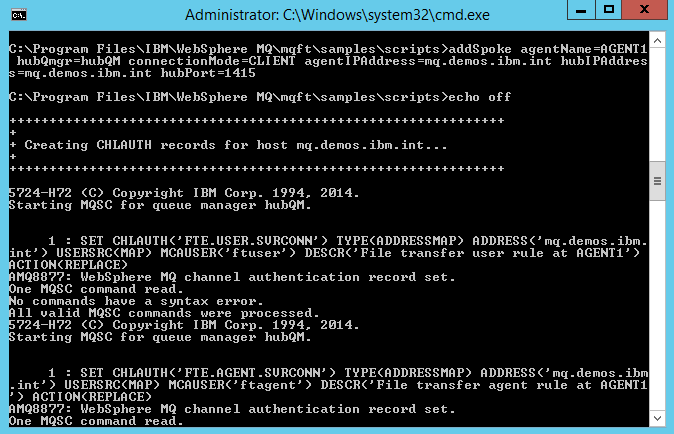 When the AddSpoke script is finished, some more commands need to be executed. These commands is posted in the Command Prompt, so they have to be copied and run in a shell. 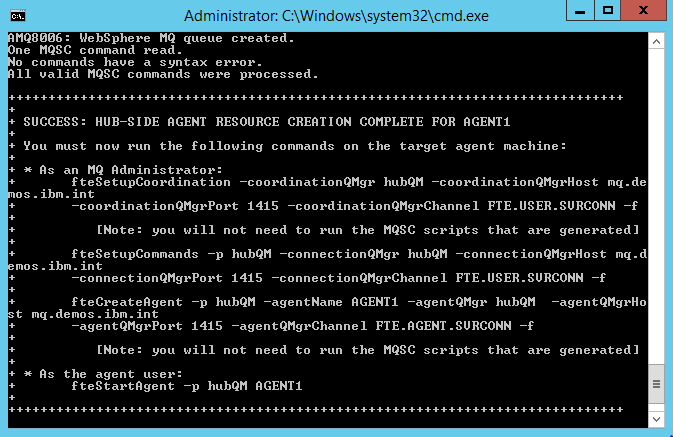 I opened a shell in <WMQ Installation Folder>\bin and executed the following commands:

As Agent User (I use the SI_User I have created since I have added this user to all groups):
fteStartAgent -p hubQM AGENT1

The setup in MQ is now finished, and there should be an hubQM created, and an AGENT1 created under Managed File Transfer -> hubQM. 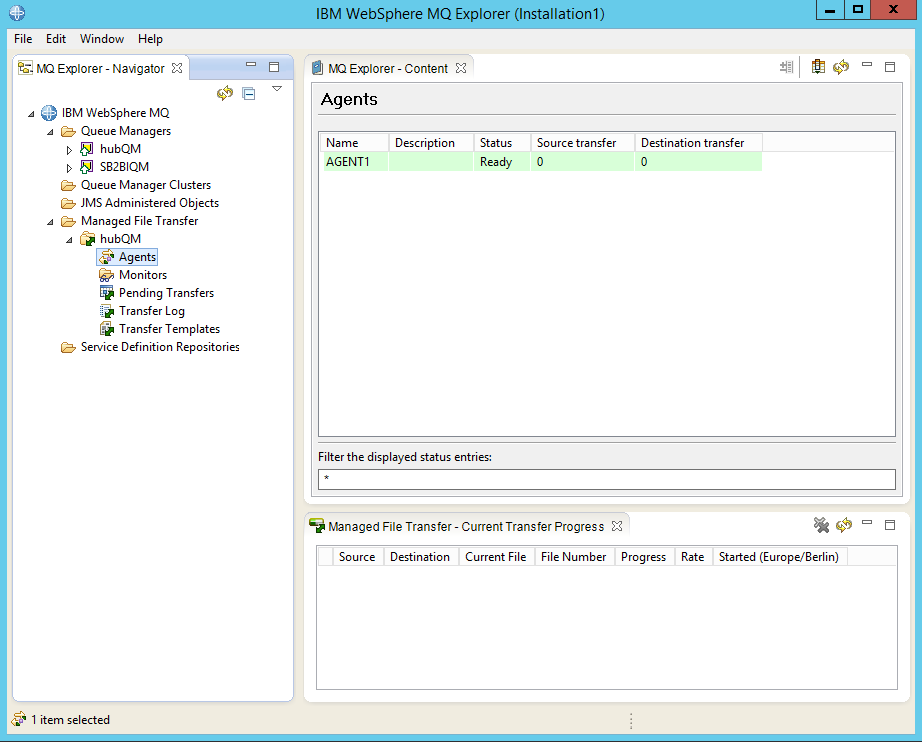 The next step is to Configure Sterling B2B Integrator. Continue to the next page for that…